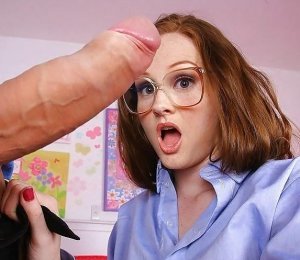 As a reminder, I was pretty clueless about sex when I was a teen. My parents (more specifically, my mother) never really discussed anything more than the very fundamental mechanics of it, emphasizing the myriad negative consequences for failing to be a “good” girl and having anything to do with a dirty pee-pee tail. I didn’t have an older sister to let me in on the secret, and my few friends were too shy to talk about it or were just as clueless as me. I had to learn about sex via “on-the-job” training.

I scored my first boyfriend when I was 15. I kept him a secret from my family, and only saw him at school or talked to him on the phone when no one was around at home. I was in “love” and we even went so far as to hold hands. I had my first kiss in front of the school while waiting for the late bus on a drizzling spring day. Our torrid romance lasted a whole three months before I got dumped (he told one of my friends to tell me it was over and that we could still be friends).

Once I’d known the joys of having a boyfriend, I was eager to find another despite the heartbreak (which, to be honest, wasn’t as bad as I thought it would be). Danny and I sat next to each other in French class and so we were often paired up for conversation practice – which we were both awful at. He was a nice guy, but I hadn’t considered him as boyfriend material until he asked me out on a real date out of the blue one day. I was sixteen by this time, but the rule was no dating until I was at least 17 (although, if it were up to my dad, it would have been 27). It took a couple fights with mom and dad, but there was a negotiated settlement that I could go out with him if it was a group date.

After that night, we were a thing. There was hand-holding and kissing – all the possibilities when it came to physical love. At least that’s what I thought up until he touched my boob.

We were making out in the last row of the darkened movie theater. We sat back to take a break, his arm draped around my shoulder. Minutes later I felt him shifting. I thought we were going to resume sucking face, but then his hand was there, on my boob, cupping me through my bra and sweater. Panic mode. What was I supposed to do? Slap him? Run away? Call the police? He began squeezing while I ran through my options. I wasn’t supposed to let boys touch me like that, but the problem was that it felt good. Really good!

I didn’t stop him. Furthermore, I hoped he wouldn’t stop. There was more kissing and more chest groping and it was perfectly delightful. So much better than holding hands! Adding my tits into the mix really fired up our relationship for the next couple weeks. We quickly advanced to under-the-shirt/over-the-bra action. Without my mom knowing, I bought myself a bra with a clasp in the front. This provided easy access the next time I saw Danny and he was thrilled to finally get his hands on my bare breasts. His palms were a bit sweaty, but I didn’t care. How could my sex life get any better? That’s about the stage that he gently took my hand and placed it on his crotch.

There was something there. Something long and hard. I knew about penises, and had an abstract notion of erections, but this was something else! I wasn’t sure what to do (or not do), so I just squeezed it the way he did with my boobs. He seemed fairly happy with that, so I figured I was on the right track. Cut to his friend’s house. Brian and Kelly were in the family room making out; Danny and I were in the less-comfortable but private formal living room doing the same. My bra was undone and my shirt pushed up. I was massaging his hard-on through his jeans when he leaned back, unzipped his pants, and pulled it out. Whoa, Daddy!

Sure, I’d been curious, but I wasn’t going to be the one to make that move, or even ask for it. But, as it turned out, I didn’t have to. There it was, my first penis…in the flesh.

It was circumcised (as have been all the penises I’ve been given access to). Looking back, I’d estimate it to be in the neighborhood of 6½ inches. A nice upward curve. Super hard and literally pulsing. I wasn’t introduced to his balls on this occasion, but I was mesmerized. The thing that most surprised me were the veins. That scared me a little. I was expecting the shaft to be smooth – at least that’s what it looked like in the drawing I saw during Sex Ed! I instinctively wrapped my hand around it and our kissing resumed with a renewed passion.

He began kind of humping up and down, which gave me the clue that I needed to be doing something more than just squeezing it. I began stroking and earned a happy moan from him. I wonder if my palms were sweaty…

After seeing Danny’s penis, my perception of sex shifted. I honestly hadn’t considered the cock in much depth before that day, but it had suddenly become a central focus for me. I was fascinated with it. It was like this alien creature living in my boyfriend’s pants. It was so strange, and frightening, and irresistible all at the same time. I loved the way it felt in my hand. The skin was soft and moved in my grip like nothing else did. I came to realize the veins that had put me off at first actually gave it more personality – it would look too weird if it was just smooth skin. I adored his cockhead. The shape, the color, and it’s soft squishiness. The pee-hole was so cute. I tried not to think about it, but as soon as I saw it, I wanted to see what it would like pissing. Gross – what was wrong with me? Or, so I worried at the time. The cock was an amazing thing all on its own, but then the bizarre fact that it was supposed to go into my vagina was almost too much for me to get my brain around.

Things naturally progressed from there. He got into my pants and fingered me. Danny convinced me it would be okay for me to suck his penis, and it was. It really, really was. He never really went down on me. I was a little freaked out by the idea of it, but he did go down there and kiss around a few times. It felt nice, but it stressed me out. When he broke the news to me that his family was moving away in August, I learned what heartbreak felt like for real. It was the following week that I lost my virginity.

There were a couple letters once he’d gone away, and one long-distance phone call, but then we both just sorta moved on. He was a good boyfriend and he opened up a whole new world to me. I finally had an inkling of what real sex was, and how wonderful it could be. I thought I knew it all at that point, but little did I know there was still so much more to learn. But, no matter what else happens in my sex life, Danny’s will always be my very first penis.

12 thoughts on “My First Penis”