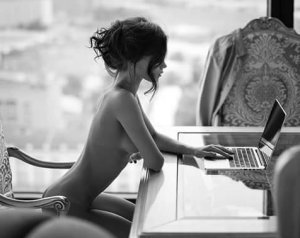 A literary prostitute, that is. Allow me to explain…

As some of you have probably already noticed, I’m in the process of a transformation of sorts. I’m changing my screen name from DirtyMinedMom to DirtyMindedMinx. I’ve decided to do this for two reasons, one practical and one personal.

I’ve received several compliments over the years for my writing that included the suggestion that I write for the commercial erotica market. About a year ago, I began actually thinking about trying it. Then didn’t do anything about it. A few months ago I began actually looking into what it would entail. It’s a bit daunting, but I decided that once the kids were back in school that I would use some of the extra time I would have during the day to make an attempt.

After some experimentation, I learned that my second objection wasn’t a problem. And as far as the first issue goes, if I was going to be writing commercially anyway I figured I might as well bring someone else’s vision to the page along the way. With that in mind, I came up with a new plan.

I’m going to offer my services as an erotic writer for hire. I will take your desired premise, plot, characters, fetishes, settings, or situations and turn them into a story custom made just for you. Then, depending on the deal you choose, I will publish the story for the general public (changing any personal details that may have been incorporated into the story, of course). I think this approach will give me an opportunity to not only fulfill a need for many of my devoted readers, but it will also provide me with a library of diverse works to offer as a “professional” writer.

One of the things I discovered during my research is that almost all eBook publishers require characters to be 18 or over, and none that I could find were (according to their terms of service) okay with incest or “pseudo-incest.” This, obviously, presents a problem for me and eliminates the majority of the personal stories I’ve written or plan to write. This means that the stories I’m most interested in custom writing will not violate these restrictions. Which brings us back around to my name change.

Initially, I’m only intending to “advertise” my custom story services here at my blog. I want my loyal friends to have first whack at this opportunity, so to speak. When (or if) I open myself up to a wider audience for my custom story services, I don’t want to be pigeon-holed by my screen name, which has something of an incesty vibe. DirtyMindedMinx is less limiting while still being essentially accurate. Maybe when I hit 40 I’ll have to change it to DirtyMindedMature, but I don’t have to start worrying about that for a few years yet!

I’m still sorting out the details of how my new underground career as an official smut peddler will work, and I’ll do another post soon on the specifics of it all. Just to give you an idea, I’m settling in on rates that range from $5 to $15 per page (~600 words) depending on the genre (publishable vs. non-publishable) and who retains the rights. Just to give you an idea, most chapters of Open Door Policy run about 10 pages. I’m also considering rates for people who want to collaborate, or want me to edit and proofread their own erotic story. I’m also toying with the odd idea of some sort of role play by email service. Not sure on that one yet.

In the meantime, I’d be curious to hear from you if any of my proposed professional services are of interest to you. For everyone else, don’t worry. My screen name is changing, but that’s all. I’ll still be keeping up with my blog and all that entails, as well as writing about the kinky things that turn me on. It’s going to be a challenge, that’s for sure, but with a little self-discipline I think I can pull it off…or at least I can continue to get you to pull it off – which is job #1 here at DirtyMindedManufacturing Inc.

Now if you’ll excuse me, I have to put on my platform heels, squeeze into my neon micro-dress, and hit the streets looking for a few literate tricks.

22 thoughts on “I’ve Decided to Become a Prostitute!”